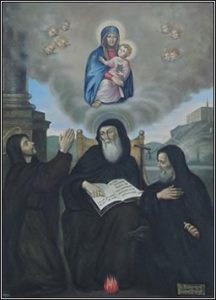 Born in 251, at Coma in Upper Egypt, Anthony was the only son of his wealthy Christian parents. Because of the pagan influence in the city, he was educated at home. A short time before his twentieth birthday, his parents died, and Anthony inherited their large estate, their money, and the responsibility of caring for his young sister.

One day while he was in church, about six months after the death of his parents, he heard the words of Christ spoke to the rich young man: “If thou wilt be perfect, go, sell what you hast, and give to the poor, and thou shalt have treasure in heaven; and cone, follow me” (Matt. 19:21) Anthony took this command literally, and gave the greater part of his land to his neighbors. Them, selling the remainder of his estate and distributing the money among the poor, he placed his sister in the care of some holy women and moved to a deserted tomb near his village, to become a hermit. He resided there for fifteen years, praying, fasting, and studying spiritual life under the direction of religious men who lived nearby.

Anthony was not a sudden, clear-cut ascent to sanctity; his loyalty to God was frequently tested. Saint Athanasius, his biographer, reports that he was often severely tempted by devils, who, assuming the form of wild beasts, would beat him unmercifully, sometimes leaving him half dead. But Anthony learned to ignore the demons and, through prayer, always got the best of them.

When he was thirty-five, Anthony left his native surroundings to retire into absolute solitude. He crossed the Nile River and settled in an old deserted fort near the east bank, at a place called Mount Pispir. His seclusion was short-lived, however, for his reputed holiness attracted many potential disciples, who wished to be instructed in monastic lie. These men settled around Pispir, east of the Nile, and near Arsinoe on the opposite side. In separate caves and crude huts, meeting from time to time for religious services. For five or six years, Anthony devoted himself to organizing and directing these monastic colonies, then he withdrew to Mount Colzim in the desert that lay between the Nile and the Red Sea. Here he spent the last forty-five years of his life in semi-seclusion,

Frequently crossing the desert to

Mount Pispir and often instructing the people who came to visit him. Although he preferred isolation, duty would have it otherwise, and twice he went to Alexandria: once in 311,

during the persecution of Maximinus, to encourage the Christians suffering martyrdom; and again about 355, to preach against the Arian heresy. He died about the year 356. Because Anthony requested that his body might never become an object of veneration, his grave was kept secret by the two disciples who buried him.

Anthony’s practice of living a semi-hermitic life is still observed in many parts of the East; in the West it is represented to some degree by the Cathusians. He is considered to be the father not only of monasticism but of all forms of religious life.